The second SIA workshop for junior researchers was organized at the Aging Research Center in Stockholm, September 3-4, 2019. Eleven doctoral students and postdocs from three Nordic countries participated. The aim of the workshop was to give junior researchers within the SIA-project the possibility to get to know each other as well as presenting, receiving and giving feedback to each other’s work. There was a wide range of interesting papers being presented on topics such as the impact of integrated care on the utilization of emergency care among older people; mortality among Finnish-born migrants in Sweden; the interplay between intelligence and education on the risk of dementia; and, the consequences of structural changes in a disadvantaged housing area in Denmark.

Johan Fritzell started the workshop with a presentation of the SIA-project and then senior researcher Marijke Veenstra from NOVA, OSLO, gave a talk about formal and informal care challenges in a Nordic welfare state. The rest of the first day consisted of six paper presentations with following discussions. Day two started with a talk by Professor Marja Aartsen from Nova, OSLO, about early childhood and later life social network influences on trajectories of cognitive functioning and physical health. Then followed presentations and discussions of four papers and the day ended with a lecture by Marja Aartsen, editor of the European Journal of Ageing, concerning what to think about when submitting and reviewing a paper. The workshop finally closed with a feedback discussion and ideas about future collaborations. 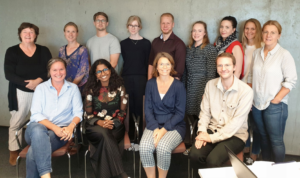 When evaluating the workshop, the following question was asked to the participants; What was the most positive aspect with the workshop summarized in one word? The answers can be found in this word cloud.